The next meeting of the Fulton Amateur Radio Club will be on Wednesday, October 24, at 7 pm.With the entry of the United States into World War 2, Amateur Radio activities ceased at 0000z on December 9, 1941. Hams turned their talents toward aiding in the war effort.The Radio Corporation of America (RCA), in conjunction with the US Army and Navy, produced a film entitled "Radio at War", highlighting (in dramatic fashion) the contributions of radio amateurs. Please join us for a showing of this film.Side note: The ARRL pushed the FCC to create a radio service during the war to provide communications for air raid protection and natural disasters. The service was called the War Emergency Radio Service (WERS) and was a precursor to Civil Defense and Radio Amateur Civil Emergency Service. Unlike ham radio, communities held the WERS licenses, not individuals. An individual participating in WERS had to have a ham license. The WERS frequency assignments were 112-116 and 219-225 Mc. 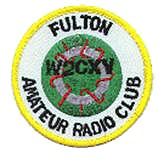